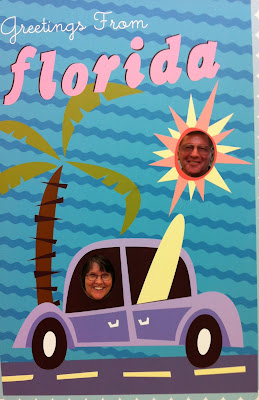 On the last day of our road trip, we stopped at the Florida Welcome Center just across the Alabama state line.

We were amazed to see an old high school friend from Indiana who was on her way to St Augustine with her family.  Such a coincidence and such a small world!

It is always so much fun to stop at a Florida Welcome Center!  On this day, the sky was blue with white, puffy clouds and the sun was shining. Florida is the Sunshine State.

There is nothing quite like a free cup of fresh-squeezed Florida orange juice or grapefruit juice—so refreshing.

Ponce De Leon first landed near St Augustine in 1513.  He named this magical place Florida which means “Place of Flowers”.  He was searching for gold and a mythical “Fountain of Youth”.  According to legend, the waters of the Fountain of Youth had the ability to make the old young again.

As he continued his exploration down the coast, he encountered strong currents and named the place Cape Canaveral which means “Cape of Strong Currents”.  He named a small island near the Florida Keys the Dry Tortugas because it had many turtles and no fresh water.

In 1531, Ponce De Leon tried to establish a colony near Charlotte Harbor.  His landing party was not welcomed by the native Calusa Indians.  They had heard of the Spainish Conquistidors–conquerors.  During a skirmish, the Ponce De Leon was shot in the leg by an arrow.  He died in Cuba as a result of his injuries at the age of 61.  Unfortunately, he never found gold or the Fountain of Youth in Florida.